After 5 rounds Alkaloid Skopje and Economist Sgseu Saratov have both won all their matches, but Alkaloid are placed first at the moment due to their superior second tie-break i.e. the total number of winning games. In third place are Ural Svedrdlovskaya after their big 5-1 win against Novoborsky, Sk. The spotlights were on the top board encounter between Mika Yerevan and Economist Sgseu Saratov. The match was shaded by Economist by the closest of margins 3.5-2.5. Alkaloid Skopje played A Dan Dzo & Pgmb and won by the confortable score of 4-2 to take them into the lead. 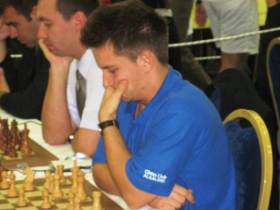 Top individual scorers with 100% are Volokitin,A 5/5pts for Alkaloid on board 2 and Adams,M playing for Osg Baden Baden on board 4.

In the Women's competition it was third seed Samaia Tbilisi who, by winning their match against three-time-champions Monte Carlo, won the day's biggest clash! In this match the actual Women's World Champion Kosteniuk,A lost to Javakhishvili,L (on second board), which proved decisive as the three other games were drawn. Spartak Vidnoe won with the enormous score of 3.5-0.5pts against Polonia Votum Wroclaw to leap into first place. In a close tussle Economist Sgseu Saratov went down to T-Com Podgorica by 1.5/2.5pts.

Spartak Vidnoe are now ahead (on tie-break) with Samaia Tbilisi in second, followed by T-Com Podgorica in third place. The best women scorers, each with 4.5/5pts, are Koneru,H on first board for Monte Carlo and third boards Lahno,K and Kovalevskaya,E playing respectively for Spartak Vidnoe and T-Com Podgorica. 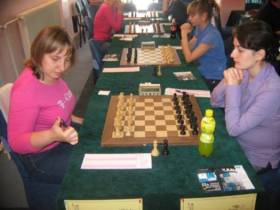 More details on the official site: