In the mixed section there are 54 teams. Clearly this must be one of the strongest team tournaments of all time featuring 141 GMs with 79 players rated over 2600, and of these 18 are over 2700. The strongest of all the teams is the Russian Economist SGSEU-1 Saratov squad with an average rating of 2703, their top player being GM Alekseev,E 2725 (currently 19th in the FIDE ranking). 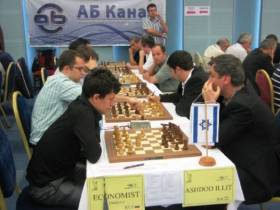 The mixed section is played over 6 boards in a 7 round swiss. The rate of play is 90 minutes for the first 40 moves, plus 30 minutes for the rest of the game with an increment of 30 seconds throughout.

Note that the strict 'sit or lose' rule (now implemented in most official FIDE events) will apply i.e. that if the player is not sitting down at the board at the beginning of the game he or she will lose on default.

The women's section brings together only 11 teams with the strongest being the one from Monte Carlo. Their top player is the Indian Grandmaster Koneru Humpty rated 2595, the world's number 2 female player.

The prize for the winning team in the mixed section is 11000 euros, and 3750 euros for the Women's champion.

The official site has more details.