The Seville Variation had its heyday before I started writing for ChessPublishing.com (i.e. a long time ago!) and it's rare that the well-established theory gets shaken up, however here is a case where it is. 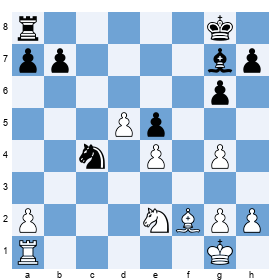 This position after 20.d5 was already seen in one of the legendary Karpov-Kasparov encounters, and has been played a few time since. Here Emil Sutovsky introduced a new (and excellent!) idea against Le Quang Liem. Black played 20...b5! and then demonstrated a way to obtain adequate counterplay.

In essence: placing the bishop on a3, the knight on d6 and then pushing the queenside majority is a good plan, especially if combined with a timely ....Rf8.

In the game, the Israeli GM later went for bizarre complications with a piece sacrifice (probably going for more than a share of the spoils?) and a fascinating struggle ensued in which White should have won.

Go to ChessPublishing to see more of the very latest Grünfeld Defence theory!