Here are the standings before today's sixth round.

The three teams in contention are as follows:

After six of the seven rounds the table is as follows:

The surprise leaders are only the fifth seeds:

Giprorechtrans (a Moscow based River transport & construction company) have 8 match points with one match remaining.

The other 2500 players present are members of the AVS team:

Logical of course, but it's worth noting that in the more common analogous position (with the extra moves ♘-f3, ♘bd7 having been played) this move is considered unplayable.

In general Black does best to keep his dark-squared bishop if his other minor pieces aren't in a position to become very active.

Slowly but surely, the plan of freeing the light-squared bishop takes shape. 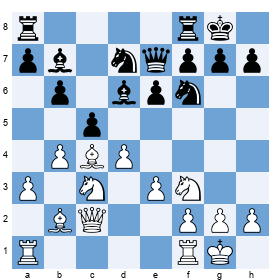 The diagonal is opened and the bishop sees the light of day. This thematic move seems to equalize as there seems to be no way for White to keep any pressure.

Opting for an asymmetric structure. White now has a majority on the queenside but on the other hand loses some influence in the centre. 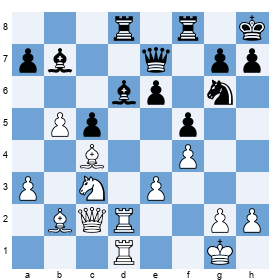 With the forces being fully mobilized it's time to find a plan for the middle-game.

From now on it's Black who has all the play and it's certain that White should have preferred something else here.

The best option seems to be 25.♖xd6 ♖xd6 26.♖xd6 ♕xd6 27.♘d5 f4, when White has two bishops for rook and two pawns. A pair of Bishops is often a powerful force in open positions but here they are not particularly effective and Black's pawns are advanced and well-supported. Matters would be far from clear. 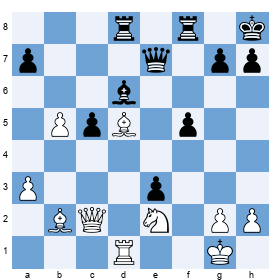 Insisting on forcing White's king into the open.

Correctly going for the whole point.

Desperate, but the only way to stave off the threat of ...♖h6+.

Self-pinning, but not for long.

After 34...♔h6? 35.♕e5 Black would have nothing better than taking the perpetual check.

Otherwise Eljanov won his other four games to be one of the two highest scorers!

The relevant information is in Russian as the English version is out-of-date!