As in the Classical games from last week, the Chinese men came out on top but the Russian women partially redressed the balance.

The rapid games had the time limit of 25 minutes per player plus an increment of 30 seconds per move. Each player played one game against each of the opposing team on each of the four days of hostilities.

The team members on the men's teams were as follows:

The women's teams were as follows:

On each of the four days' play, the matches were very tight indeed as you can see from the table below:

So after adding in the results of the Classical games, China scored 128 as opposed to Russsia's 122 and thus won their 7th annual match. 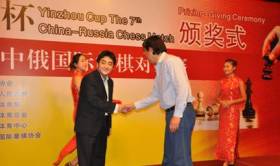