Wang Yue was no doubt surprised by Carlsen's daring opening choice and reacted with a solid albeit slightly passive system. White managed to keep some advantage due to his extra central pawn that eventually became passed. Despite the reputation of the opening Carlsen won a nice controlled positional game.

The Blumenfeld is another opening that rarely gets played at this level, but Nisipeanu does venture this slightly off-beat opening occasionally.

In the opening Ponomariov declined the gambit and gave up the bishop pair in order to obtain a central space advantage. The complex positions that resulted also led to White obtaining an advanced d-pawn that led, to a significant degree, to Ponomariov's success.

Gelfand played the Petroff as he does so often, but rarely does he come under such a vicious attack as today. Radjabov played a fine combination involving a (temporary) piece sacrifice that left Gelfand's king very exposed. The Israeli survived to an endgame, but a losing one. 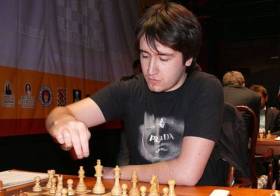 Wang Yue has now been left behind with the other five players within half-a-point of each other.

Two wins in a row by Radjabov have catapulted him up the table into equal first with Magnus Carlsen.