Carlsen continues to advance up the rankings list and will now be second, hot on the heels of Topalov, with a 2800+ rating on the 1st of November, when the new ELO ratings will be released. The ELO ratings list is the internationally recognized way of comparing the relative strength of players and from now on will be updated every two months. Only a handful of players have ever reached 2800, indeed I estimate that he is only the fifth.

The result in Nanjing was exceptional and certainly one of the best performances in recent years. According to my calculations Carlsen's performance was about 3000! How many times has that been achieved? 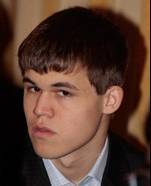 How far can he go? For example 2814 will take him to second highest in the all-time list. Maybe the real question is how long will it take him to make 2852, perhaps someone should ask what his trainer thinks!