The first game of the final demonstrated Carlsen's ability to 'pick at' his opponent's position until something gives way! Pressing to open the game, and in particular Black's king, for his bishop (against Anand's knight), enabled Carlsen to gradually take control.

So with Anand obliged to win the second game, Carlsen settled for a solid opening system.

So Carlsen wins the Arctic Chess Stars title and Anand has to settle for second place.

Hammer defended solidly in the first game and was never in trouble.

In the second, Judit didn't handle the black pieces as well, as she lost time and as a consequence control of some key squares. This quickly led to the loss of a central pawn and there was no coming back from this serious blow.

If you missed them earlier, here are the latest videos courtesy of Gérard Demuydt and Robert Fontaine and Europe Echecs. 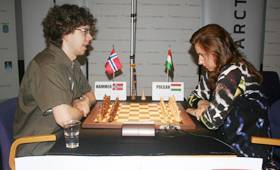