In Friday's Blindfold games there were four White wins.

One of these was Carlsen's win over Gelfand and another, more surprising, was Smeets's over Kramnik.

Carlsen had again caught Ivanchuk (who drew) in the battle for first place in the overall standings. However it seems that Carlsen is the king of Blindfold chess with a full point more than his closest rival. 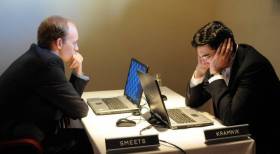 In the day's rapid games, Karjakin won with Black against the hapless Dominguez who is out of sorts and stuck firmly at the bottom of the table.

Ivanchuk drew again against his compatriot, and thus adds 0.5 to his rapid total, but with Kramnik winning he is no longer in the sole lead in rapidplay.

By winning both games, Carlsen outpaced Ivanchuk and now has the overall lead.

The battle for third place is hotting up with three players on 7/12.

Aronian is well down the field in tenth after finishing first in the previous two editions.