The third round again saw Carlsen taking the ascendance in his game, although he will be disappointed not to have taken the full point.

David Howell steered play into an assymetric structure where he had a preponderence on the queenside. Later he won Black's weak c-pawn but Carlsen's pieces were always the more active. Eventually the Norwegian broke through and his activity led to him winning the exchange. David deserves great credit for the way he kept on fighting and eventually scraped a draw, despite this result looking distinctly unlikely at one point!

Luke McShane tried to play a solid opening, but was outplayed by Kramnik who found a way to activate his position, while at the same time McShane found it difficult to harmonize his pieces. Even worse for the Englishman, White's king got in the way of his rooks and while McShane sought a solution Kramnik seized control on both flanks.

The Marshall Gambit is a theoretical line where Black sacrifices a pawn for continuing compensation (dynamic bishops, kingside pressure). Ni Hua was even able to capture an important central pawn but Adams obtained dangerous play along the long light-squared diagonal. So there was nothing better for Ni Hua than giving back his pawn to obtain simplification into a drawish ending.

Nakamura against Short was quite calm. Short played some dynamic little ideas with the black pieces in the Nimzoindian defence while Nakamura tried to maintain his space advantage. Black chipped away and exchanges followed leading to balanced equality and no winning chances for each side.

The tournament standings going into the rest day:

Carlsen won the 'best game' prizes on both of the first two days, whereas in the third round presumably Kramnik will obtain this award.

The fourth round will be played on Saturday (as Friday is a rest day).

You may be interested to see the Norwegain's recent results. One can certainly conclude that he is still improving!

His previous loss in a classical game was in Dortmund against Vladimir Kramnik, he also lost his last round game in Sofia two months earlier against Alexei Shirov.

Finally a couple of close ups of the players involved in the match for second place going into the rest day. 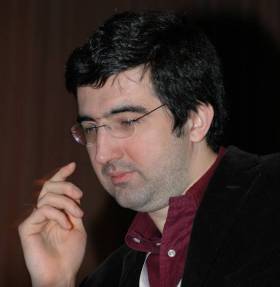 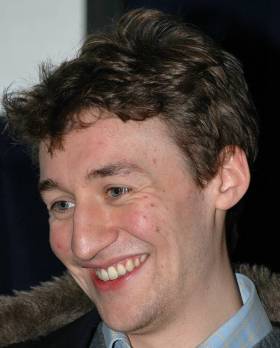