Grischuk loses but is still ahead in the Blindfold competition with 7/10.

Behind him Carlsen has 6.5 and Ivanchuk 6 before tomorrow's last round games.

No one could break the deadlock in the Ivanchuk-Kramnik clash, so Ivanchuk stays unbeaten and Kramnik half-a-point behind the Ukrainian. 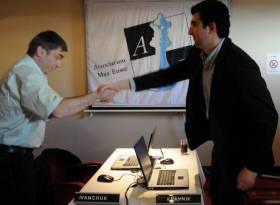 Carlsen wins with Black to get to seven points in the rapid tournament and now catches Ivanchuk with Kramnik just behind on 6.5.

Three Black wins in the rapids, including Jan Smeets who wins the battle at the bottom.

Ivanchuk has managed to play his twenty games without loss, but has only has achieved one 2-0 victory....against Carlsen!

In comparison, Carlsen has achieved five wipe-outs in his favour!

In tomorrow's earlier start, Grischuk plays Carlsen and can even catch the Norwegian if he wins 2-0, so nothing is decided as yet!

Palais de la Méditerranée in Nice where the tournament is being played.
© official site.