Kramnik didn't seem particularly ruffled by Carlsen playing the English Opening like a reverse Dragon. With his space advantage the former World Champion was able to create sufficient play to win a pawn, but Carlsen defended the rook ending accurately and held the draw. 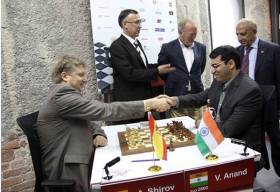 Shirov-Anand, but today the colours were reversed © official site

Shirov played the provocative McClutcheon variation where he induced Anand into complications. The Indian started chomping into Black's kingside while allowing Black to make progress elsewhere. At one point Anand spurned a draw by repetition, but Shirov gave up his rooks to get his c-pawn through to the promotion square which forced a perpetual check.

So Kramnik's 'plus two' with two rounds to play stands him in good stead, but he still has to play Anand (albeit with White) and the unpredictable Shirov (with Black) a second time, so he'll still have some work to do if he is to win the Masters.

As a reminder, here is a summary of the earlier rounds:

On Thursday (14th) and Friday (15th) you will be able to watch the games live at the following times: