The Biel Young Masters round robin ended with a three-way tie for first place.

If you like play-offs then it's worth finding a live connection for tomorrow morning (29/7/10). The official site has had problems the last couple of days so I've been going via 'The Week in Chess' site.

Negi against Vachier-Lagrave was a complex Taimanov Sicilian with opposite-sides castling, but just as the game was hotting up the players agreed to a draw. I presume that the Frenchman didn't like his position and Negi had probably had enough of this tournament!

Fabiano Caruana led the game off the beaten track with 3.f3 (an Anti-Grünfeld ploy), which was especially the case after David Howell's off-beat reply 3...Nc6!?. The tense struggle for central squares soon fizzled out into a drawish position around the time when the players agreed to call it a day.

These early peace deals must have encouraged Andreikin and Nguyen, as a win (by either of them) then had the added incentive of getting into a share of first prize.

Both Andreikin and Nguyen went for gold, but with mixed success.

In Wesley So's Old Indian against Dmitry Andreikin, things played out very much like the main line of the Spanish. White had more space but Black was very solid. Later the Russian avoided a repetition as his knight was superior to White's bishop with a blocked centre. He tried very hard to extract winning chances out of the endgame but So held fast.

Nguyen played a King's Indian Attack, a system which is familiar to many club players, but is rare at this level. Later a tactical flurry led to Nguyen sacrificing a pawn or two for active pieces. He regained his material in the endgame and won the resulting rook ending.

In Rodshtein-Tomashevsky the Bogo-Indian defence soon turned into a type of King's Indian. A surprising turn of events! Later Black's king proved to be the most vulnerable as Rodshtein again had a 'good knight vs inferior bishop' scenario. The Israeli's play against the Russian's king netted him a pawn but the queen ending was only drawn.

The final table is as follows.

The leading three will have their play-off tomorrow morning. 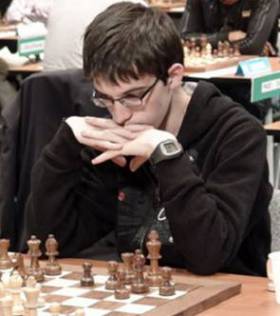 No losses for Maxime @ chessbase 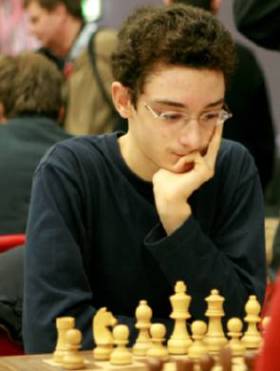 Another draw for Fabiano @ Zugzwang