The Dane Bent Larsen was probably the strongest Scandinavian player in history until Magnus Carlsen arrived on the scene and certainly made his mark on chess history. One example of his influence being 1.b3 is generally known as Larsen's opening.

He qualified for the Candidate matches on several occasions, finishing third twice. He managed to come first (or equal first) in three Interzonals: 1964 Amsterdam, 1967 Sousse and 1976 Biel. In the candidates matches which he particpated in four times he was eliminated by Tal, Spassky, Fischer (all world champions, the latter two on their way to the title)and Portisch. 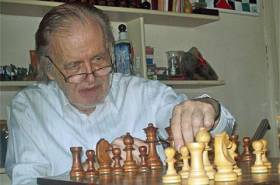 Larsen a few months ago at home @ Chessbase.com

Denmark's strongest player was born on the 4th of March in Thisted Denmark and became one of the west's first 'professional' players in 1956, the same year he achieved the GM title.

I hope to follow up this short chess Biography with a game or two (soon!), as his style was rather original and worth pointing out to a younger generation who aren't so familiar with the great Dane.

The photo in the logo is of his playing Botvinnik in an Olympiad meeting between Denmark and the USSR.