Here are the results from the second round:

But also check out the French Federation site:

Gawain Jones from England is the fifth seed in this year's tournament. In 2010 he lost out in the Blitz play-off, to the eventual winner Shakhriyar Mamedyarov, in the quarter-finals.

On the second day of the event, throughout the day dozens of young players from all over the island were playing their own tournament at the theatre. There were excellent prizes (computers, a home cinema, ipads, game consoles and so on), plus the top twenty will get the chance to play in a simultaneous display against Pavel Tregubov and Shakhriyar Mamedyarov on Thursday. 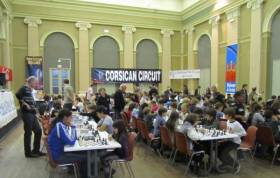 Overall, the main organizer, Léo Battesti, and his team have managed to get 120 diverse corporate sponsors on board. This must be something of a record!

Here he is below (that's him on the left!) along with my favourite chess-inspired advertisement from the event. 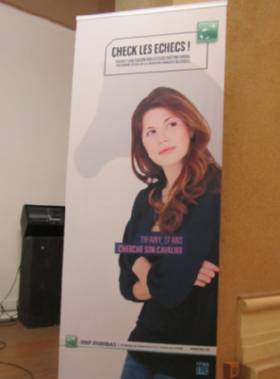 Tiffany is seeking her knight (in shining armour). 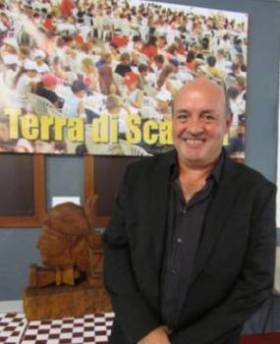 Léo Battesti, the main mover on the island
In this folder