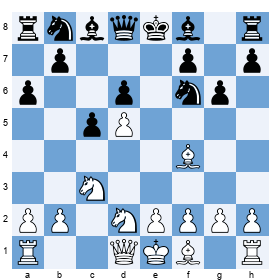 This line has been largely forgotten, but I feel it certainly contains some danger for Black, and it's quite revealing that even leading Modern Benoni expert GM Vugar Gashimov has struggled against it.

7 Bf4 a6 8 Nd2 is similar to the Knight's Tour (7 Nd2), but with the bishop already on f4, any Nc4 is going to exert immediate pressure on the d6-pawn. For this reason Black usually prevents Nc4 with 8...b5, and here 9 a4! is clearly the most challenging response. Black must play ...b4, but he has two options: he can either force the bishop off the diagonal first with 9...Nh5 10 Be3 b4, which is covered in Munkhgal-Pavlov, Moscow 2012; or he can play the immediate 9...b4, which is dealt with in Pedersen-Haubro, Helsingor 2011. In both lines there have been new ideas for White and things are certainly not that easy for Black.

Gashimov has played 8...b5, but he lost badly to Aronian with it. More recently, in Laznicka-Gashimov, San Sebastian 2012, he tried the rare move 8...Nbd7!?, which could be taken as a sign that he isn't entirely happy with the main lines after 8 Nd2. He loses this game too, but 8...Nbd7 does look like a decent alternative to 8...b5.