It was top against bottom in the fourth round where Negi opted for a solid Queen's Gambit and managed to achieve a drawish rook ending to earn his first half-point.

Tomashevsky acquiesced to a quick draw as Caruana was about to fully equalize with ...c5.

Giri against Vachier-Lagrave started in lively fashion but simplification led to a solid position where there was nothing much for either player.

Andreikin's win came from a Neo-Grünfeld (where White fianchettoes his king's bishop) in which Black seemed to get his pieces tangled up. Howell avoided material loss but had to allow White's rooks onto the seventh rank with devastating consequences.

The Russian now moves up to equal second. 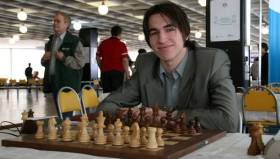 So Wesley So maintains his lead.