The third successful pawn sacrifice in the match. On the evidence of the match so far, both of these players seem more comfortable having the initiative.

Here are our famous videos about the event.

A blow for Topalov's self-confidence but he now has a rest day to digest this loss and get himself ready for the fifth game when he will have White. 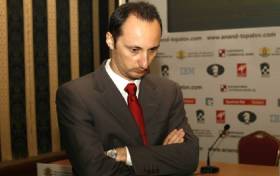 Oh no! Not again! @ Official site

The game with my annotations follows on below:

In other circumstances (when he needs to win at all costs) Topalov might essay the more double-edged 3...c5.

The Bulgarian varies from the second game, although his position wasn't that bad after the opening (despite the eventual result!). 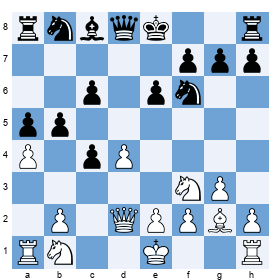 A new move and quite a good-looking one.

A logical, but ugly move as Topalov decides to defend both b5 and c6. The alternative bishop development 10...♗a6 is possible, but 11.♘e5 ♘d5 12.♘xc6! ♘xc6 13.axb5 ♗xb5 14.♘xb5 leaves White with a pull due to his superior structure and a fine Catalan bishop.

Using the knight to hide his weaknesses.

Shifting the knight, but at the cost of temporarily reducing the bishop's influence along the diagonal.

So far the moves seem to follow on naturally from Anand's novelty 10 ♘a3, so this position was probably still in the bounds of his preparation.

After 14...f6 Black may later have to worry about a slight loosening of his structure, but I can't be sure what Anand had in mind. it could have been 15.♘xd7 ♕xd7 16.♕e2 ♘8a6 17.d5 with pleasant activity for White.

The thematic way to exploit a lead in development in gambit lines in the Catalan as line opening should suit the better developed player.

Keeping things murky! Anand applies the principle of avoiding unnecessary exchanges when on the offensive. One can understand his thinking in that the obvious 16.♘xc6 ♘8xc6 17.dxc6 ♕xd2 18.♖xd2 doesn't seem to yield any advantage after 18...bxa4 19.♘xc4 ♗xc6.

Foreseeing that he will soon be able to capture on c4 with a knight.

Possible is 18...♗xc6 19.axb5 ♗xb5 when I can't see anything dramatic for White, however 20.♘axc4 ♗xc4 21.♖ac1 would leave White with a slight pull as White's minor pieces are likely to be superior to their black counterparts.

Black has a nominal extra pawn (see the doubled a-pawns) and has made steps towards completing development, but White's forces are the better coordinated. So Anand can be fairly pleased about the result of his opening experiment.

A quiet little move with explosive consequences! Here 20...♕h5 is a lesser evil but, I must admit, I wouldn't feel particularly comfortable with Black's queen 'over there'.

Neglecting the kingside proves to be a fatal error of judgement. 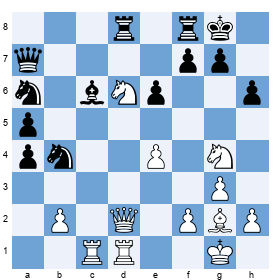 The only serious defence where Black's queen can be brought over to help out on the other wing. Now in order to exploit his initiative White needs to lift a rook over to the kingside.

Threatening the bishop as well as ♖-e7.

Black's threat to the f2-square only delays the inevitable. Now his kingside falls to pieces.

A sensational display from 'Vishy'.