The first classical encounter was a fairly balanced draw where Gelfand's Petroff held firm. Today's game was an even more cautious affair as a draw was agreed with all the pieces left on the board!

Playing White in the second game, the Israeli GM introduced the Catalan opening, which involves an early fianchetto of his king's bishop. This was met by a 'stonewall' set-up where Black constructed a wall of pawns on the light-squares. In fact play essentially transposed into Stonewall Dutch territory, and a version where both sides have harmonious development. Although there is some central tension in the final position, this type of position is generally considered to offer White few chances of obtaining anything special.

Tomorrow is Ponomariov's last White in the classical games, so will be play more ambitiously? There is no need for him to take wild risks, but it will be interesting to see if he repeats 1.e4 and takes on the Petroff again. If he doesn't have any challenging ideas up his sleeve after 1.e4 e5 2.Nf3 Nf6 then he may settle for opening 1.d4. 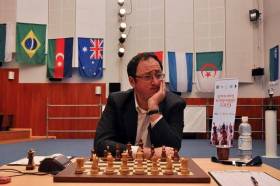