The leaders shared the point in a slightly odd Queen's Gambit Accepted. At the end Gelfand had two bishops against a pair of knights in a somewhat double-edged position, and both sides perhaps have winning chances. I presume that neither of them wanted to risk their good start in a risky time scramble.

Wang Yue against Ruslan Ponomariov was a rather dry affair with Black more-or-less equalizing and White flogging a dead horse for quite sometime before accepting the inevitable. 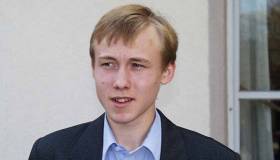 Here are some further details:

Radjabov tried 2.Nc3 and 3.Bb5 against the Sicilian but didn't obtain anything special out of the opening. A series of skirmishes led to a simplified pseudo-ending of 'Rook, Bishop and three pawns against Rook, Knight and three' where Carlsen's passed pawn gave him some chances but Radjabov held firm.