In a quiet line of the Nimzo-indian defence, Sokolov obtained the bishop pair and then pushed his g-pawn whilst leaving his king in the centre. Jakovenko tried to react actively in the centre, but Sokolov held sway in the complications, gained material and walked his king to safety.

Karjakin also tried the Nimzo-indian defence. After the opening he daringly played to win a hot pawn, but this rebounded on him as he soon felt obliged to give up the exchange.

He seemed however to give himself drawing chances, as in the endgame all the pawns were on a limited front, but Vitiugov was able to tie down the tournament favourite, create a passed pawn and shepherd it home.

In the World Cup (Khanty Mansiysk Nov-Dec 2009), Karjakin eliminated Vitiugov, so there was no doubt a double satisfaction for the lesser-known Russian! Note the fact that (in the photo) six months ago Karjakin was playing for the Ukraine, but has since switched his allegiance. 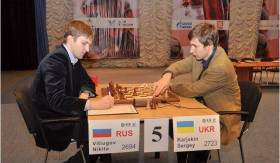 Karjakin came out on top in the World cup.

Arkadij Naiditsch kept a pull as White in an Anti-Marshall and even won a pawn in the endgame, but Onischuk was then able to activate all his forces and hold the draw.

The other three games were disappointing, and somewhat premature, draws.

Vitiugov joins a leading group of five comprising Sutovsky and Riazantsev (also both having +1=4-0) along with Karjakin and Jakovenko (+2=2-1).

All twelve players are now within one point of each other.

The sixth round will start tomorrow (before the rest day on tuesday) at 10am (London), 11am (Paris) or 3pm (local time).